I bought my Raleigh Clubman from a guy with a canal boat in Shropshire almost two years ago and it’s still evolving.

It’s a 1983 model yet the only surviving parts are the frame, fork, headset, seatpost, front mech and brake levers. Every other part has changed. At least once.

The latest change has been a new set of tan rubber Cane Creek lever hoods for the original drilled Weinmann brake levers.

I had considered getting new levers altogether to match the new Tektro R559 brakes.

I eyed TRP’s lovely RRL-SR levers in tan but couldn’t stump for the cost. And anyway, I like non-aero, cables-sprouting-from-the-top levers for a few reasons:

So I thought the best course of action was to give the existing levers a new lease of life.

The old black hoods are in good condition but are a little slippy and unforgiving and I like a contrast between bar tape and hoods.

I’m a fan of no nonsense black cloth tape so tan it was. There are a few types around: Rustines gum hoods are nice but expensive, Dia-Compe make a nice tan hood for their brakes, which will fit many non-aero levers but the Cane Creeks are perfect for the Mafac and Weinmann shape of lever fitted to so many bikes throughout the 1960s, 1970s and 1980s.

Fitting them was a doddle.

I’m pleased with the new look and they’re a lot more cushioned and grippy than the originals. 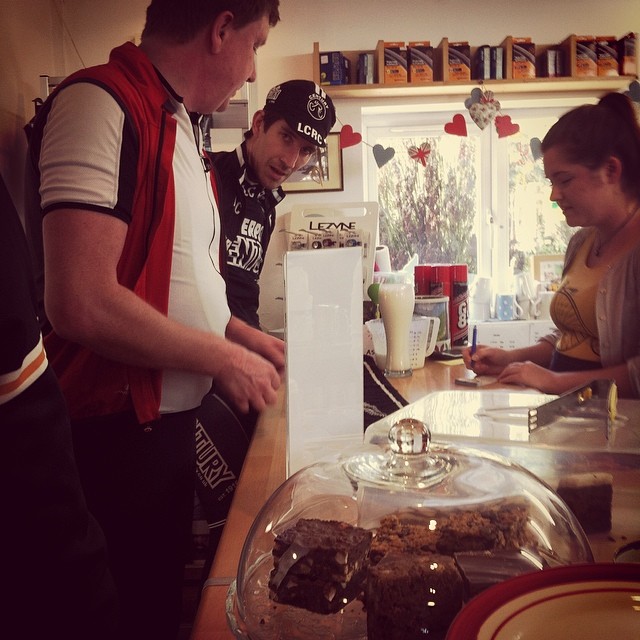 As cyclists we are all aware of that horrified look when you arrive at the door of a coffee shop in full cycling regalia, either steaming hot (summer) or with rain/ice dripping from your nose (winter).

But as the popularity of cycling grows, cafes are tuning in to the fact that bike riders are a uniquely voracious and thirsty breed, many with deepish pockets and a penchant for good coffee. 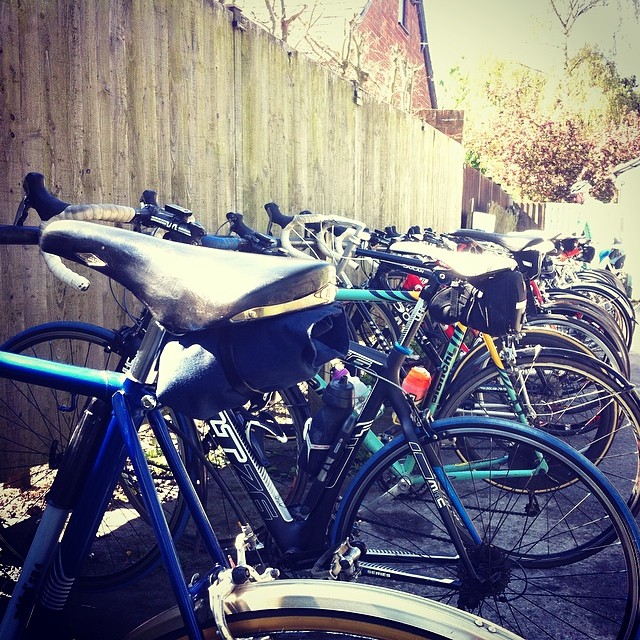 I’m pretty spoilt in my part of the world – Liverpool – as ‘over the water’ in Wirral is a mini-Flanders of cycle routes and cycling cafes. Foremost among them is Eureka café at Two Mills – known to many as simply ‘the Mills’.

Since 1929 Eureka has been a cyclists’ café first and foremost, a destination in its own right for the many and a staging post to Wales, deepest Cheshire or Shropshire for the more audacious.

However long-time cycling friend and basset hound owner Ian introduced me to another great café recently, right on the Cheshire Cycleway.

Meadow Lea Farm serves great cake, all day breakfast, great coffee and pots of tea, amongst other delights and is but a stone’s throw from the Chester Millennium Greenway near Mickle Trafford. 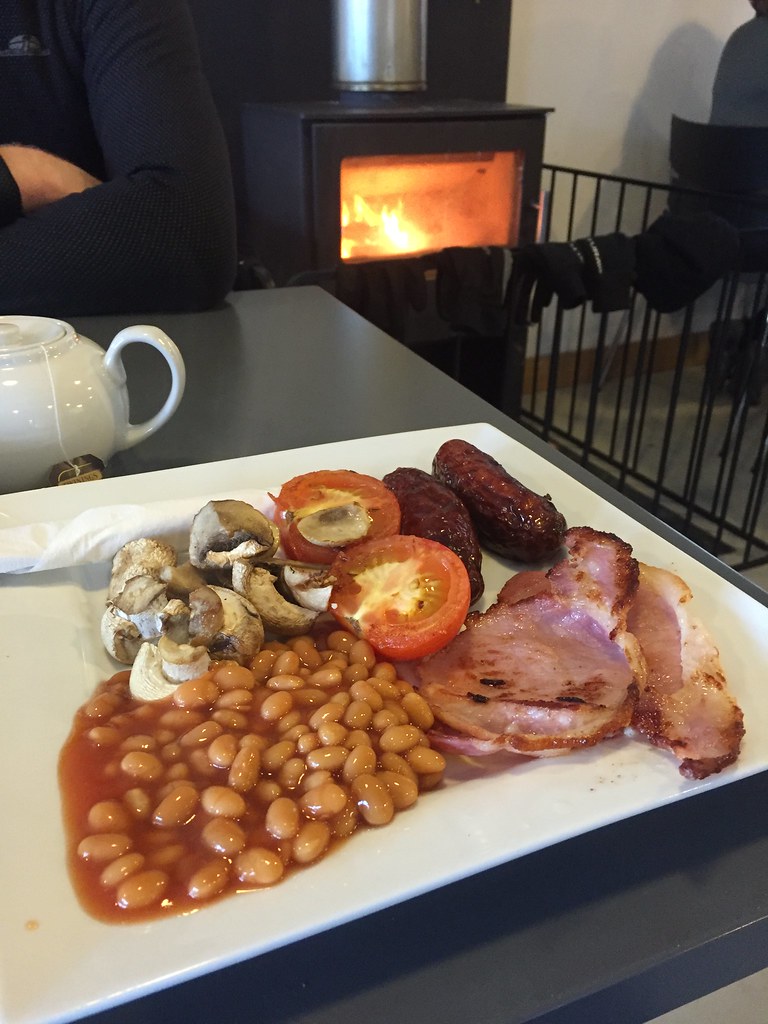 We visited there after being pummelled with rain, hail and wind in early January and its warm, non-judgemental welcome, friendly service, sumptuous food and epic wood-burning stove were much appreciated. 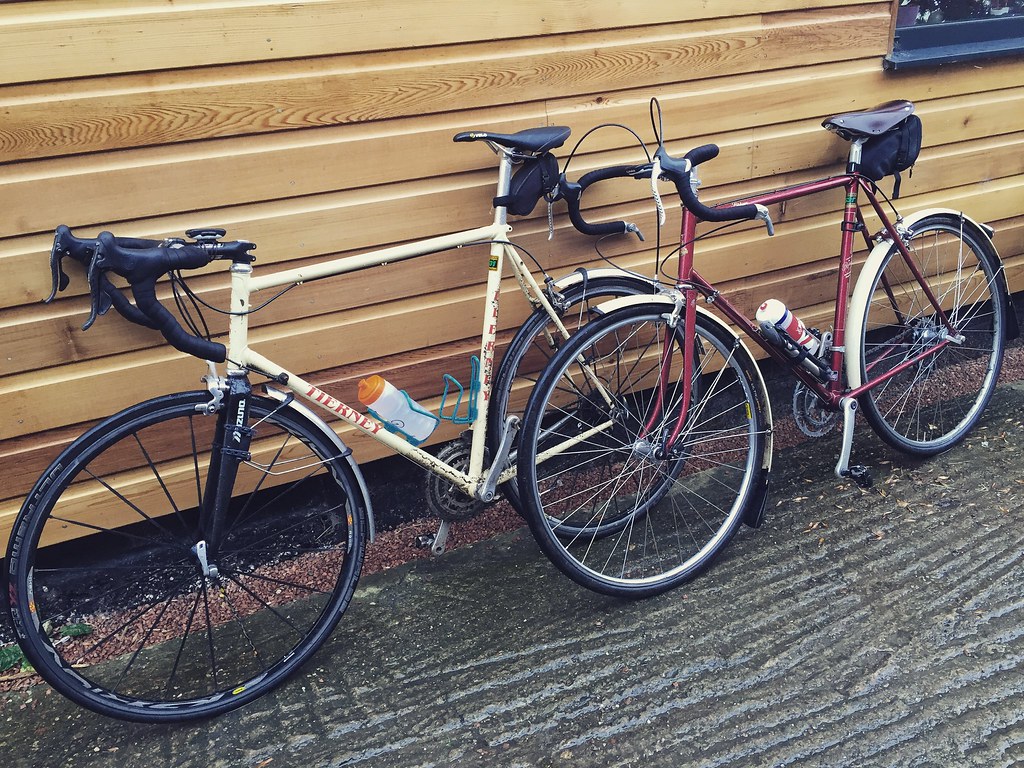 If you’re in the area, check it out and tell us about your favourite cyclist-friendly or cyclist-specific watering hole. 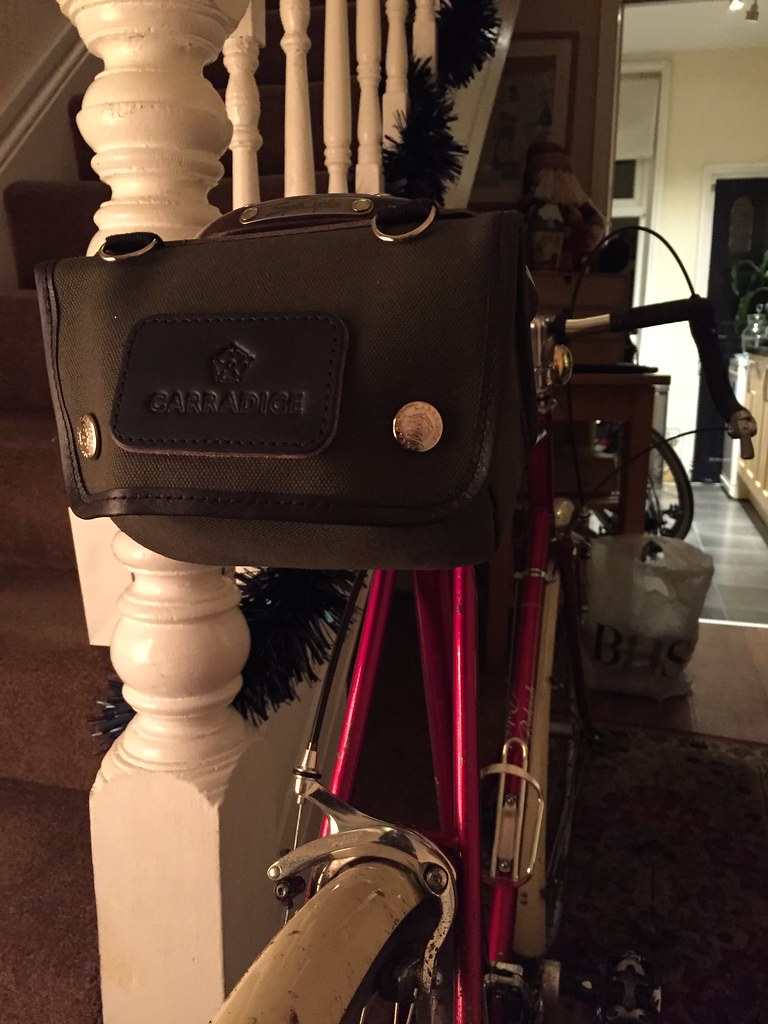 Isn’t it great when the gift idea hints you drop hit their mark?

Back in November, over a few bottles of porter, son Sam and I were discussing Christmas gifts and I suggested I needed that perfect retro saddlebag for my 1983 Raleigh Clubman. Something befitting a lugged steel frame.

I thought nothing more of it but surprisingly, given Sam’s scatter-gun brain and the porter, I opened a neatly-wrapped package at Christmas and out popped a Carradice City Classics Bingley bag.

It’s that perfect size – not too big – not too small – Goldilocks would no doubt approve. Made in Nelson, Lancashire from waxed cotton duck and thick leather, it is perfect for my tool roll, two spare tubes and my light battery. It attaches to seat rails, Brooks-style saddle loops or the handlebars, if you have the necessary handlebar real-estate.

The load is secured by two sturdy metal poppers and the whole thing looks set to outlast its owner.

The bag also comes with a canvas strap, allowing the user to remove it from the bike and throw it over the shoulder in a rakish, cosmopolitan, devil-may-care attitude. I have not yet summoned the fortitude to do this.

An RRP of £40 may seem steep (thankyou Sam!) but this will be the last saddlebag you will ever need to buy. It’s bombproof, beautiful and available in either green canvas/dark brown leather or a very Henry Ford black on black. 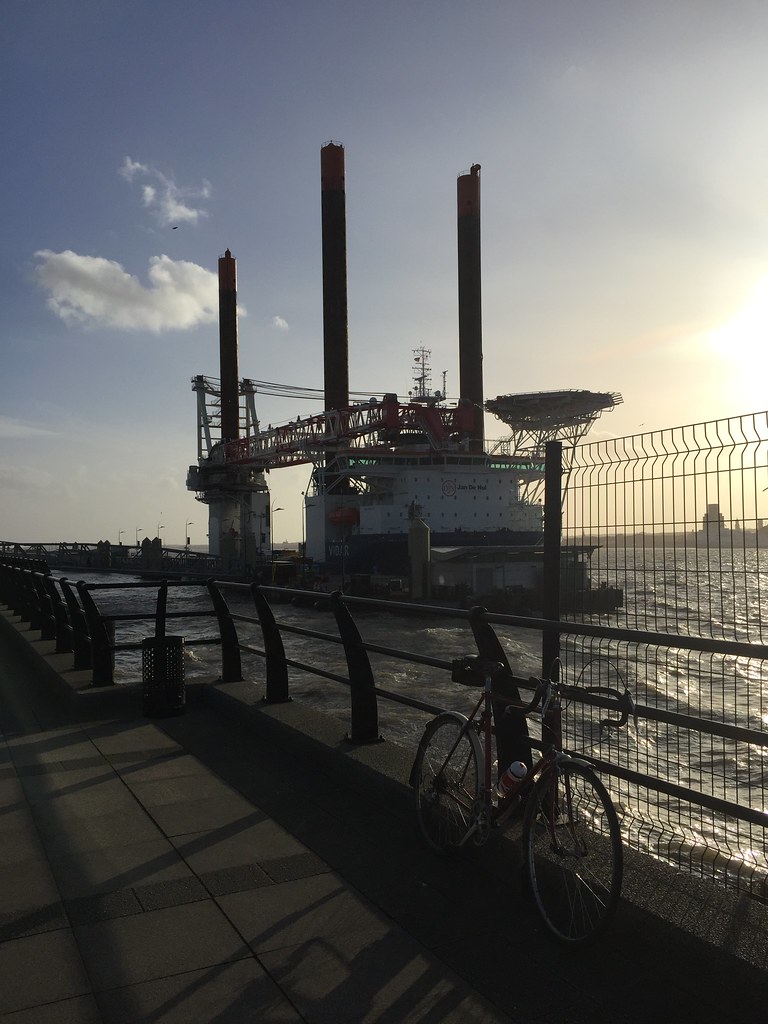 I hadn’t intended to go out but botched arrangements left me with an afternoon to kill and so I did.

I chose my ‘urban odyssey’, a 37-mile largely traffic-free loop around Liverpool that never takes me more than half a dozen crow-flies miles away from home.

I began by taking the Liverpool Loopline south to Halewood then on to Speke before joining Liverpool Promenade at Cressington.

Right along the ‘prom’ with a howling westerly giving me a proper workout before cutting through the north docks and onto the Leeds-Liverpool Canal at Stanley Dock.

From here I followed the towpath to Aintree Racecourse before joining the Loopline at the northern end near Canal Turn and heading back home.

It was a tough ride with gusting winds making steering and pedalling a challenge. And the picture highlight? Undoubtedly the massive Vidar offshore jack-up ship berthed at the Pier Head. An awesome sight. 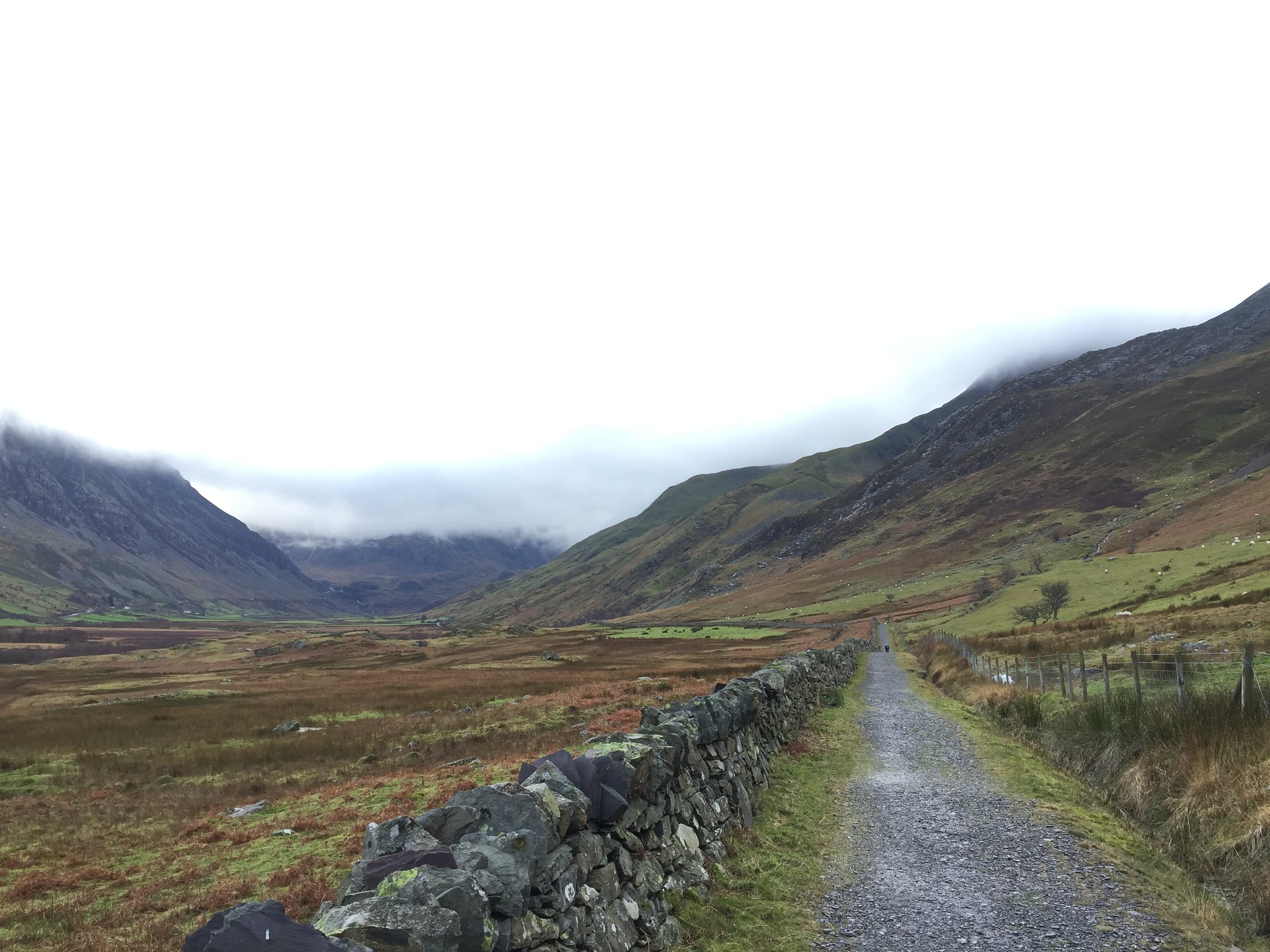 ‘Going long’ has an enduring romance in cycling circles.

Pushing yourself, getting the miles in, emptying the tank. Cycling has a clutch of phrases for the act of going out for four, five, six hours; 70, 100, 120 miles.

But for me, and I imagine many others, the shorter and more interesting rides can often hold comparable joy and stay in the mind longer.

Around Christmas, my son Sam told me about Jack Thurston’s lovely ‘Lost Lanes Wales’, a book detailing 36 short or shortish day rides exploiting some of the best roads in Wales that you’ve probably never heard of.

One of the book’s many wonderful illustrations caught my eye – unmistakably the mighty glacial valley of Nant Francon in North Wales. Running from Llyn Ogwen north to Bangor, it is possibly the finest textbook example of a U-shaped glacial valley that you’ll find in the UK, flanked by the mighty Glyderau and Carneddau.

My brother and I have walked much in the area of late but I’ve never cycled there. However I was always curious when driving up the valley on the A5 – looking across the valley to the right, spying a narrow, sinuous lane followed the foot of the Glyderau from the Penhryn slate mine to Ogwen Cottage in the shadow of Pen Yr Ole Wen and Tryfan.

Turns out that this glorious lost lane is part of Lon Las Ogwen, an 11-mile, waymarked trail that begins at the pier of Porth Penrhyn on the Menai Strait and plies the old slate mine railway before meeting the lost lane on Nant Francon’s western flank. 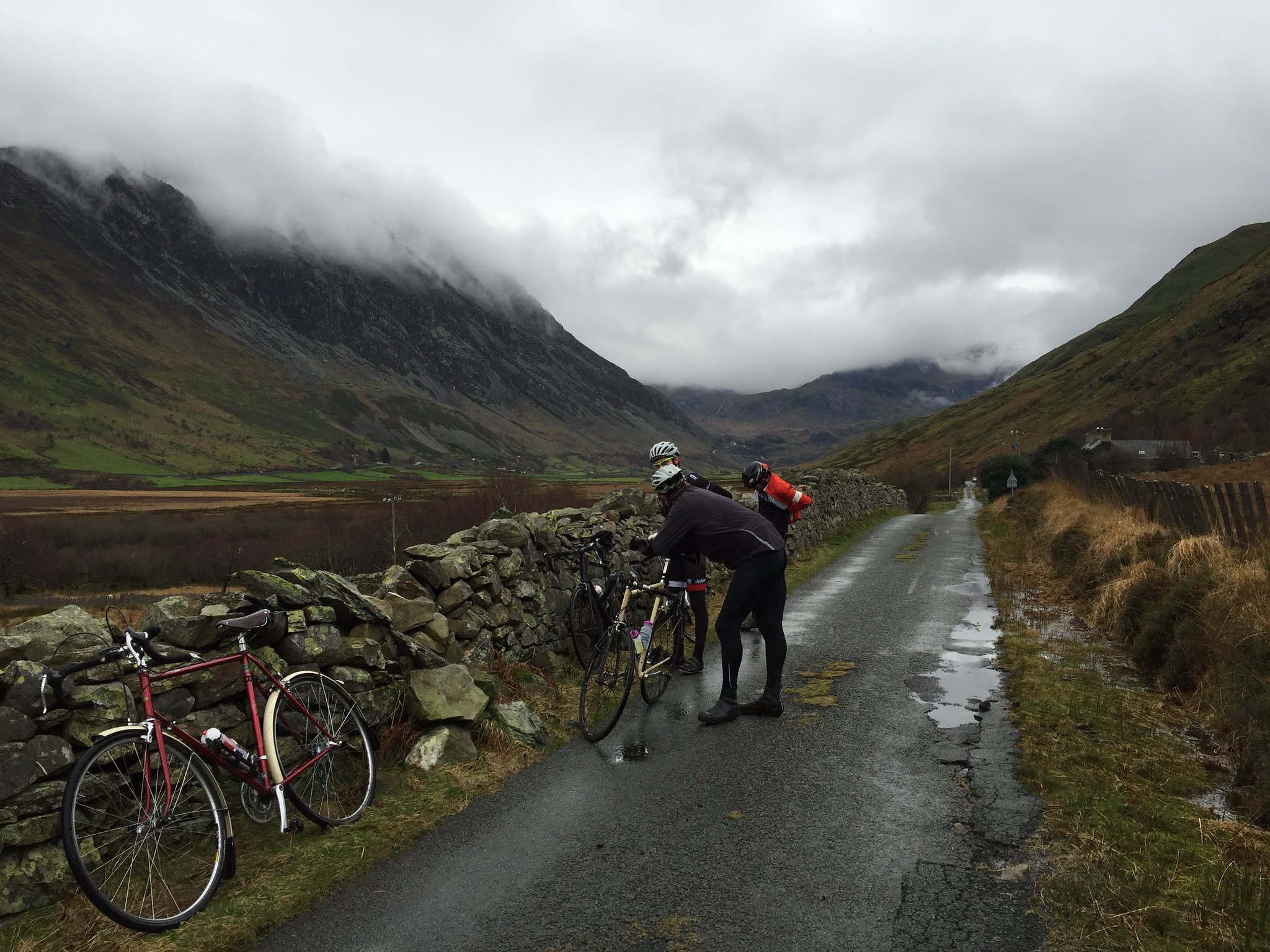 I had to ride it. 11-miles there, 11-miles back. Many ‘proper’ cyclists would sniff at such a pittance of distance but for me, the experience of riding in such majestic country, steeped in interest, was more than enough to justify the 1hr 45min drive from Liverpool.

Sam accompanied me in the car, with his De Rosa carbon road bike on the roof next to my old Reynolds 531 Raleigh Clubman. At Porth Penrhyn we met Ian, with his eponymous steel Tierney and Sam’s twin brother Tom, on his carbon Ribble road bike. 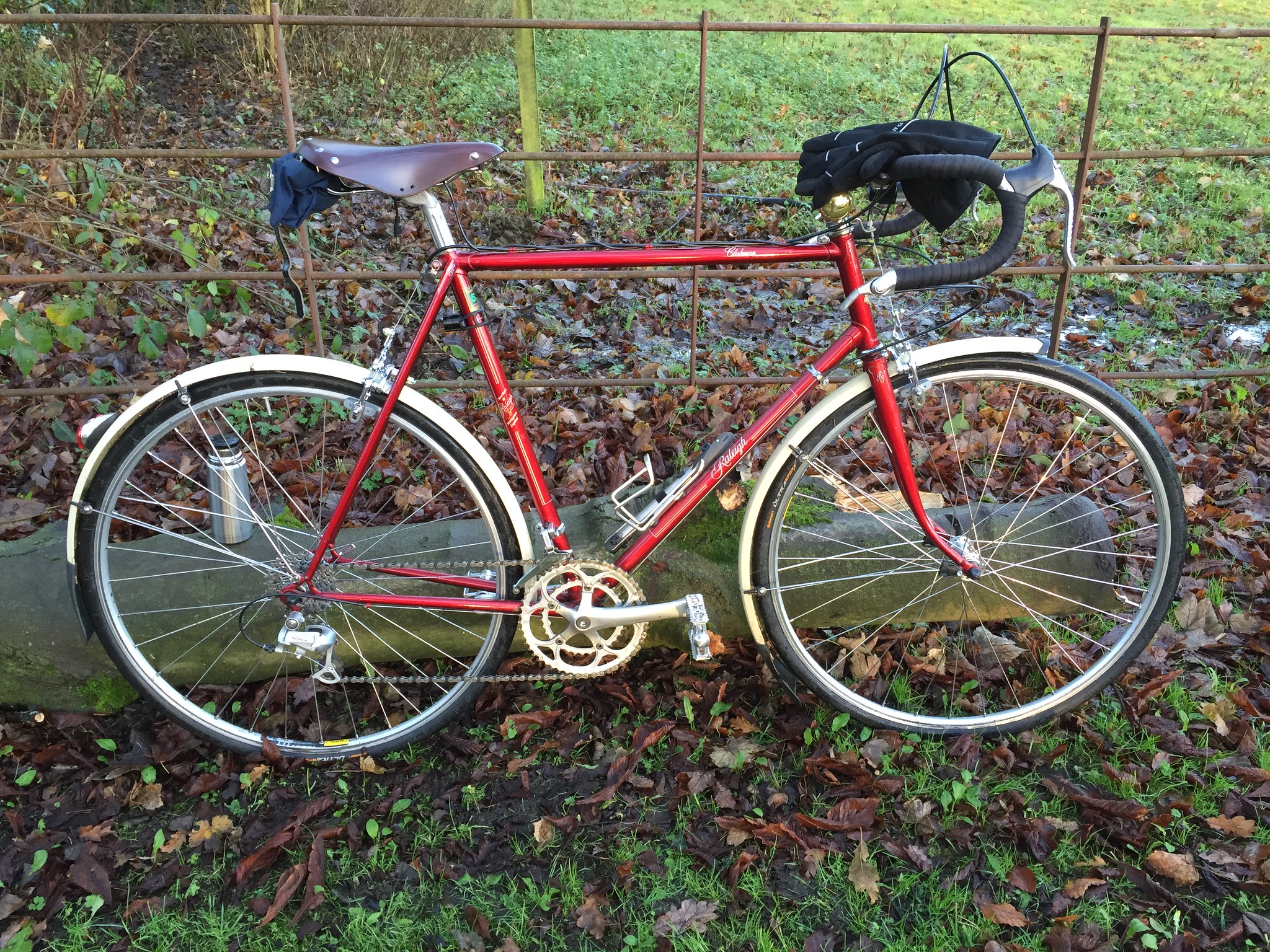 I have to admit to being a little uneasy about the terrain ahead and my companions’ bike choices. The opening section of the route was on tarmac and gravel mixed-use path, before a slate road section through Penrhyn Slate Mine. Following this was a gravel road section before a final tarmac sector to Ogwen Cottage.

I needn’t have worried. The bikes handled the route with aplomb, with only one snakebite puncture for Tom on the slate road section.

The opening salvo of the ride was idyllic, following Afon Cegin, which after a month of rain was in spate, taking its own path around trees and over rocks in the lush, deep valley. With luck the trail was never inundated but at one point our path was blocked by a fallen tree, which most of us managed to negotiate with our dignity intact. 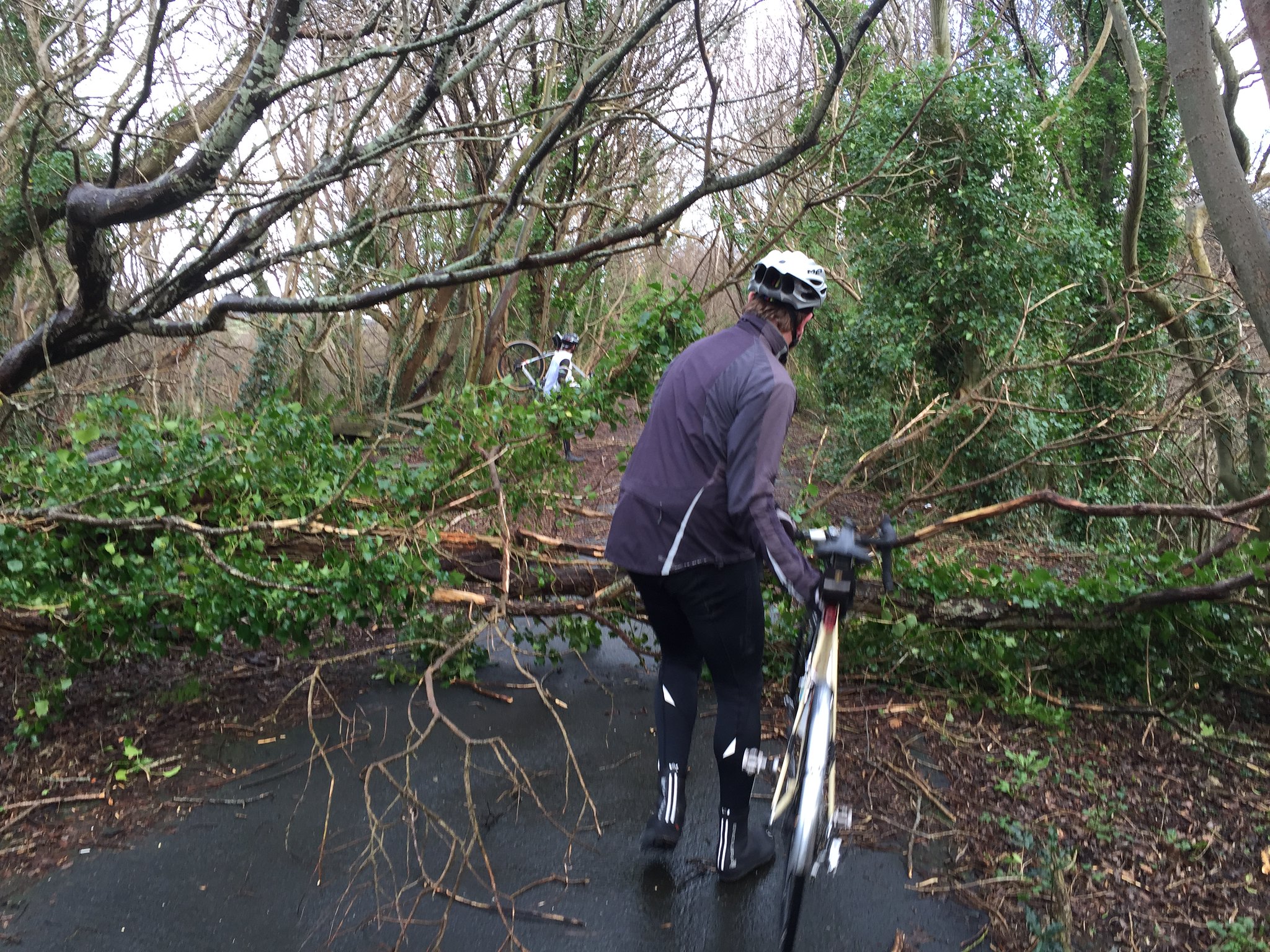 The path began to rise on the bed of the old narrow-gauge railway that once took slate from the mine down to the purpose built port of Porth Penrhyn. The steady gradient soon revealed the dramatic peaks of the Carneddau and Glyderau, with their highest tops shrouded in cloud. Soon though the terrain closed in once more. We passed through Tregarth and into the slate mine and were suddenly surrounded by millions of tons of glistening rock; the spoil heaps of a 1200ft deep mine than once ‘roofed the world’.

Now the eerie sounds of zip wires from the old quarry’s Zip World pierced the air as we helped (or hindered) Tom, fixing his rear wheel flat. The road around the flank of the mine was rough and sinuous, bucking and weaving with short, savage climbs and descents that demanded full respect on tyres no wider than 28mm. 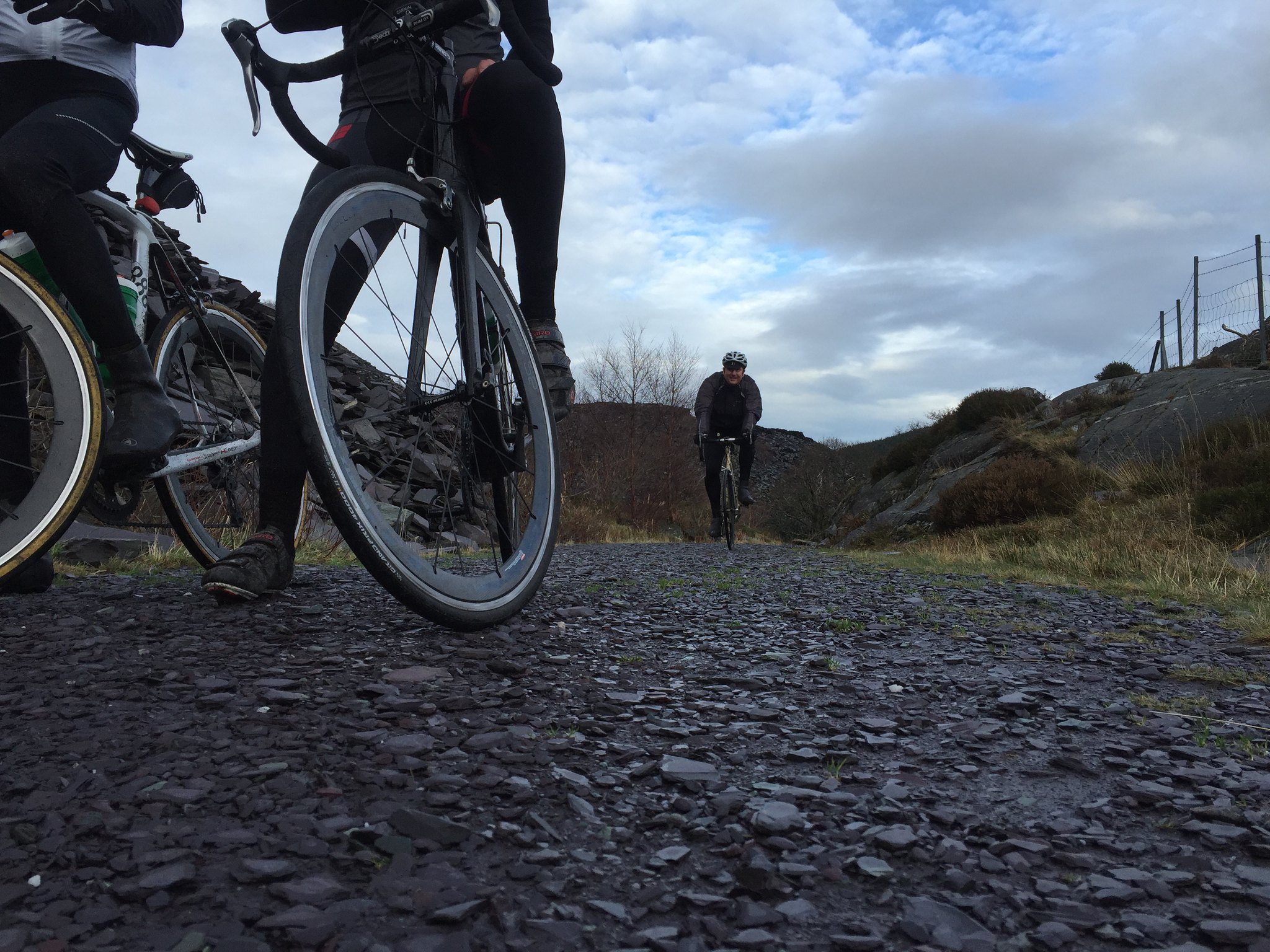 After a final climb and drop, the ominous slate heaps were behind us and the full majesty of Nant Francon was unveiled. And to cap it all we had a virtually traffic-free lane to take us to the breached watershed at Ogwen Cottage.

We hammered along the gravel section, stones pinging from our tyres until we reached the tarmac. To our right Foel Goch, Mynydd Perfedd and Y Garn loomed. To our left across the valley, Carnedd Llewellyn and his brother brooded beyond the brash western crags of Pen Yr Ole Wen.

Our destination was the cleft between Pen Yr Ole Wen and the lower slopes of Y Garn, where the outdoor centre and YHA sits. However, to get there required surmounting a series of brutal rises, which more than made up for the ride’s lack of distance.

We heaved ourselves over the climbs and passed through the small wooded area at the head of the valley to arrive at Ogwen Cottage. So often have I been there as a walker at the start of my journey that to arrive as a cyclist, mid-journey was a funny thing.

We sat and chatted, drank coffee and ate Ian’s left-over Christmas cake before enjoying the mostly downhill freewheel back to Bangor, in time to catch the sunset over a placid Menai Strait. 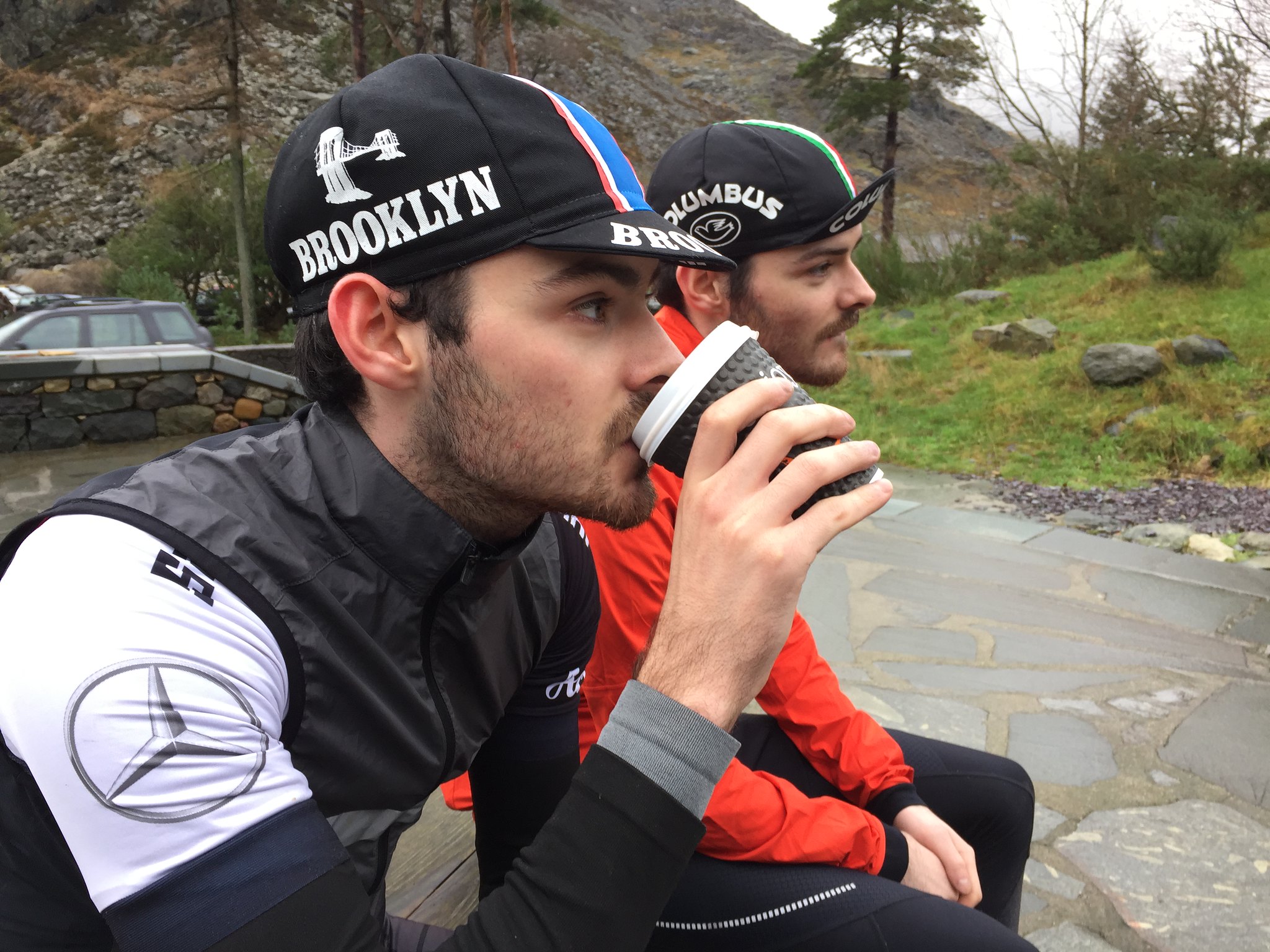 We could have extended the ride further and kept the ‘Lost Lanes’ theme alive. After a short road section passing Llyn Ogwen and the foot of mighty Tryfan, we could have turned onto the old coach road bridleway and followed it to Capel Curig, enjoyed a sit-down lunch at Pinnacle Café or Moel Siabod café a little further up the road. But daylight was in short supply and the 22 challenging and varied miles were enough. More than enough. 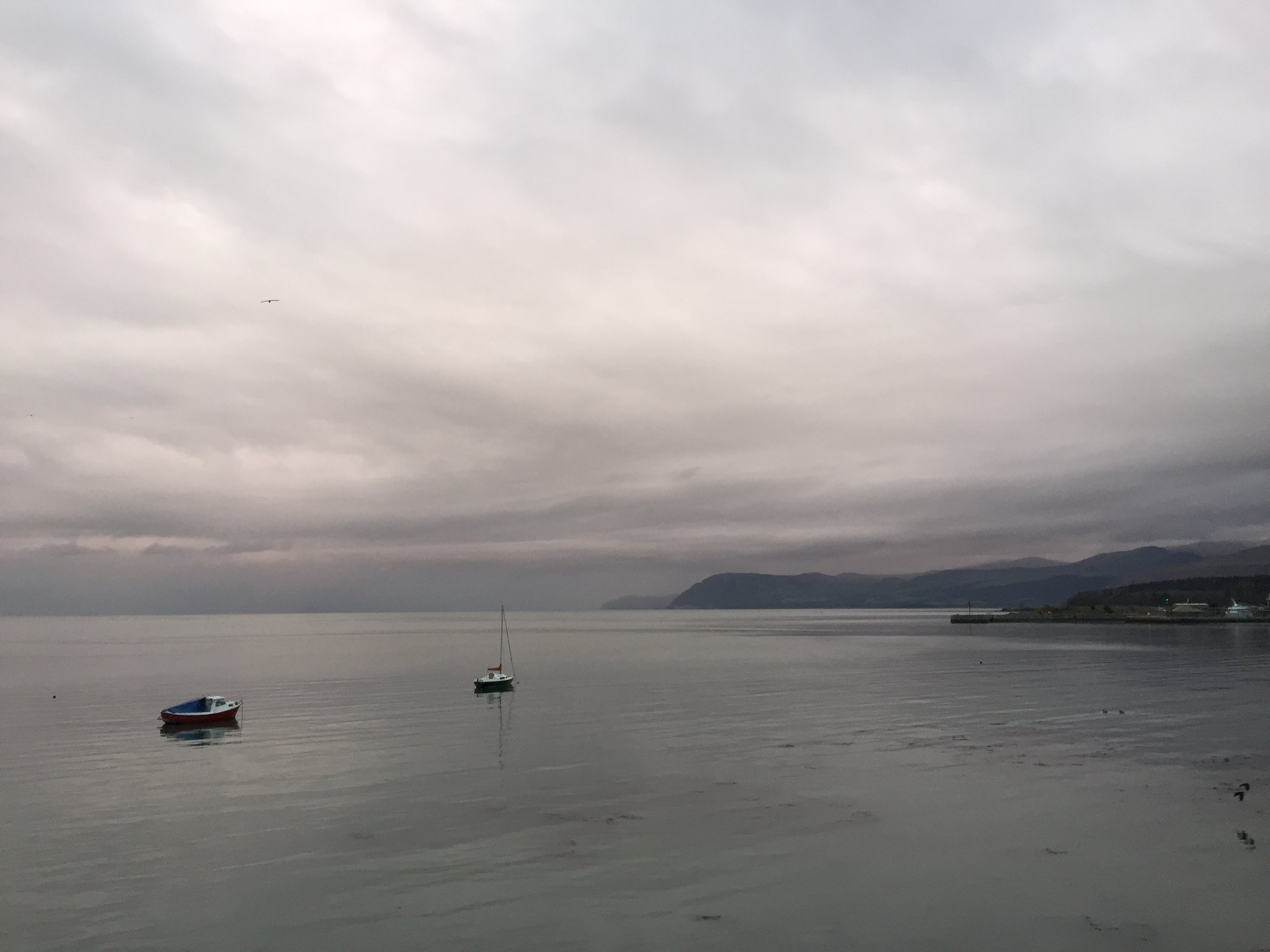