A 1984 Suntour ARX pre-index shifting rear mech. A 7 speed Shimano SIS freewheel. An 8 speed Shimano Ultegra bar end shifter. These things are not fated for a happy menage a trois when drivetrains are concerned. And yet I have today discovered that they work. And pretty darned well.

Back in 1984 – apart from Shimano’s ill-fated Positron indexing system, SIS gears were the stuff of whimsy and friction shifting ruled. 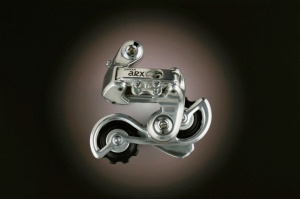 Suntour’s patented slant parallelogram derailleurs were still the sweetest shifting mechs on the block but Shimano was making rapid progress.

The ARX was at the tipping point, designed as a response to Shimano’s 600AX futurism – and to replace the ageing yet brilliant VX range. However it was still a fine piece of kit, especially for a mid range derailleur.

I’ve wanted to have the option of indexing for a while, having ridden for a few years on a positively ascetic friction-only setup.

Furtive searching of Sheldon Brown’s site confirmed that 8 speed shifters will work across a 7 speed block because the difference in cog spacing is minimal (4.8mm for 8 speed and 5mm for 7 speed according to the mighty SB).

The question was, would my achingly lovely Suntour ARX generate the correct amount of mech movement for a given amount of shifter cable movement? This was a question that Sheldon and a host of bike forum-o-nauts couldn’t readily answer.

There was only one thing for it – to get the bike in the stand and see if it worked.

It was with much trepidation that I snugged up the 4mm Allen bolt holding the cable and tentatively spun the pedals and worked the bar end shifter. Especially as the setup currently has no barrel adjuster to finesse the cable tension.

So one can imagine my surprise and delight when the chain sprang willingly from one cog to another and back again with very little complaint.

For me this experience is potential proof of a number of things: